Where the 2018 Toyota Sequoia Can Take You (and Your Whole Family!) When I request a large vehicle like the 2018 Toyota Sequoia, I’m usually pretty purpose driven. Although my YouTube audience seems to really like the big trucks, I was looking for a large vehicle for one reason: a birthday party.

My son turned 11 in January and, as usual, wanted to get together with his friends to celebrate his birthday. We’ve done the big parties with parents and dropoffs and goodie bags. But he’s at the age now where he has a small circle of friends and really just wants to “hang out.” So I proposed the idea of going out to dinner with all of his friends to some place fun like a Japanese steakhouse.

Yes! I would have everyone dropped off at the house and we would all pile into my rather large vehicle and head to the Japanese steakhouse in town. But, timing is everything and, as it turns out, we ended up with the 2018 Toyota Sequoia in the driveway about a week before his celebration. So my idea of carting five boys around and letting them explore the ins and outs on the Sequoia interior was nixed.

Switch to Plan B: Go exploring in the Sequoia and find a picturesque spot to capture the essence of this 7 passenger vehicle. I found this website called ShotHotspot.com which helps locate great places to take photos. I set out for an adventure not far from my house where I was certain I’d get some Instagram-worthy shots.

Except when I got to the area that was supposed to be so photogenic, here’s what I found. That wasn’t really what I had in mind, so I parked to see if I could figure out where exactly I was. And I saw a sign in the distance. It turns out that the “cool” photography site I was trying to get to was an old sanatorium for tuberculosis patients. Honestly, I didn’t even know there was such a thing for TB. I’m guessing that whatever remains must be reached by foot – so this was not a journey for the Sequoia.

I will say that I did question the people that I saw filling up from a jerry-rigged natural spring spigot right across the street. With horse farms nearby as well as the grounds for an old sanatorium, maybe it’s not the safest drinking water out there? But I guess it is free. So I got right back in the truck thinking there must be a great spot nearby the show off the Sequoia. In fact, I went just a few feet down the road and found a nice little pull off and a lovely winterscape of trees. Finally! A perfect place to shoot a few photos and maybe even do a video of the interior and exterior (because you have to see it to love it). And then I noticed where I was. In case you can’t read the billboard, it’s a trail marker welcoming hunters and cautioning anyone that is not armed to where a brightly fluorescent-colored vest for safety. And then I was kind of glad I didn’t walk through the woods to see that sanatorium. I proceeded with caution, though, because I was in the SAFETY ZONE (allegedly). I ended up with blurry pictures of the interior as the light started to fade quickly (luckily, I captured all of the interior in my video review of the 2018 Toyota Sequoia). And then I got stuck in the mud. 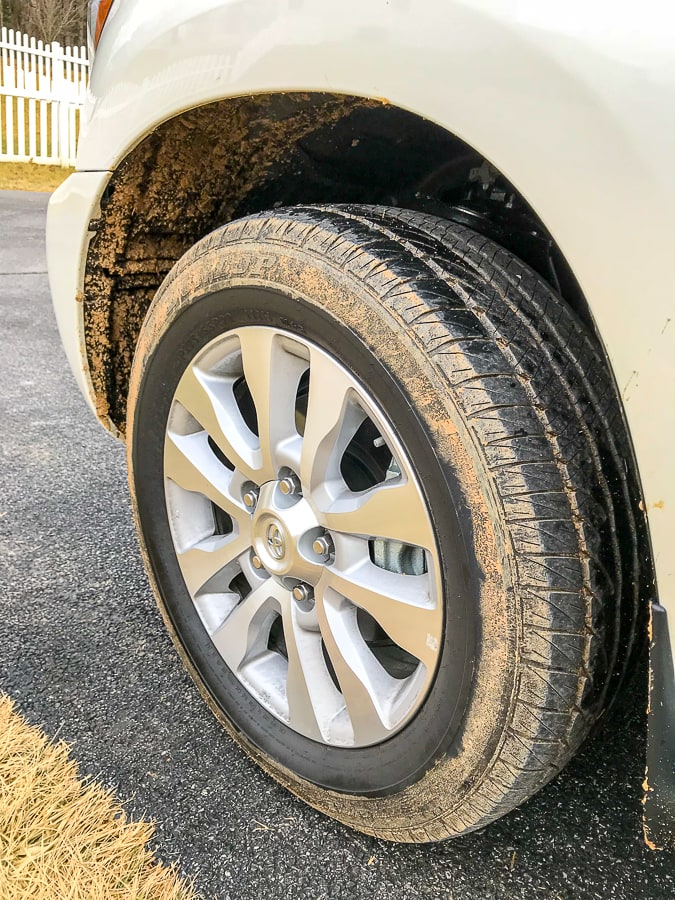 I guess if you’re going to get stuck in the mud, this is the vehicle you’re going to want. (Sorry, Toyota, for the muddy state of the Sequoia!). I decided that hunting season and the woods, while the perfect environment for a vehicle like the Toyota Sequoia, was not the perfect environment for me. So I headed to the place where I knew I could really put it to the test – the grocery store. If you’re buying a 7 or 8 passenger vehicle, it’s probably because you have that many people to haul around and you’ll need a place to put the stuff belonging to all of those people. This is why I was thrilled with the amount of space behind the third row. You could park a few suitcases back there and you can certainly handle your grocery shopping like a boss. And at the end of the less-than-perfect photoshoot, I got the perfect shot anyway. I’d say it was a pretty good day in the Sequoia. How about overall impressions of the 2018 Toyota Sequoia? Let me lay them out for you – the good and the not-so-good.

A few additional things you should know. The Toyota Sequoia hasn’t had a major update since 2008. For 2018, you’ll mainly see cosmetic updates, both inside and out. It’s built on the same platform as the Tundra (pick up truck). And it doesn’t have a heated steering wheel. You can watch me whine about that in the video.

Since I didn’t grab any great interior shots, I hope you’ll take a look at this more in-depth coverage of everything the 2018 Toyota Sequoia has to offer.

Surviving and Thriving on the 21 Day Keto Reset Diet