Move over, Vegamour. Revela Hair Revival Serum is here.
I TRIED IT! Putting the American Wave in my Hair
What I Ate in Portland, Maine
Eastern State Penitentiary is more than a Creepy Prison
CoolSculpting Part 3: The Results!
A Young Life Stolen
CoolSculpting Part 2: The Recovery
Eat, Drink, and Be Merry in Harrisburg and Hershey, Pennsylvania
Sorting Out the Timeline in the Netflix Original DARK – Season 1
Lessons Learned from My Thyroid Biopsy
Maryland Revisited For those of you who are scratching your head at the name Pimlico, it’s a race course in Baltimore, Maryland that’s the home of the annual Preakness race. If that still doesn’t mean anything to you, the Preakness is the second race or “jewel” in the Triple Crown of horse racing. And if you’re still at a loss, the Triple Crown is a series of three races beginning with its most well known run, the Kentucky Derby.

Hopefully, you’ve had an “aha!” moment and now you’re with me. Living in Maryland, especially the central part of the state, I’ve learned that horse farms are aplenty, one of the most prominent being Sagamore Farm, owned by Kevin Plank of Under Armour fame.

My only experience with horse, unfortunately was when I was in middle school staying at a friend’s house who lived on a horse farm. We had to get up early while I helped clean out the horse stalls. I think that’s when I decided I was interested in a pet horse.

While I was there the day before the big race, I learned five very important lessons as we stuck around for the Black Eyed Susan Stakes.

I knew from attending Kentucky Derby parties that you’re supposed to wear fancy hats, drink mint juleps, and bet on the horses. In fact, it may even be easier to watch the races at home. But it doesn’t beat the excitement and ambience of actually being at the track. The bottom line is this. Everyone is there for a party. And the party may involve eating, drinking, socializing, betting, or just watching but there’s definitely an energy that’s defined even by what people are wearing.

2. There are no fashion rules.

I wasn’t totally prepared for the variation of fashion but if you’re a peoplewatcher, this is definitely the place to come. I kept things on the conservative side but felt totally at home in my black maxi dress, flowered necklace, and hat purchased many years ago for a Kentucky Derby party. But the most important thing to note… comfortable shoes!! My feet thanked me at the end of the day for wearing sensible flats.

Others weren’t as sensible in their fashion but damn, they looked good! And if you think it’s just women that have all the fun, you’re so wrong. I snapped quite a few dapper gentlemen! 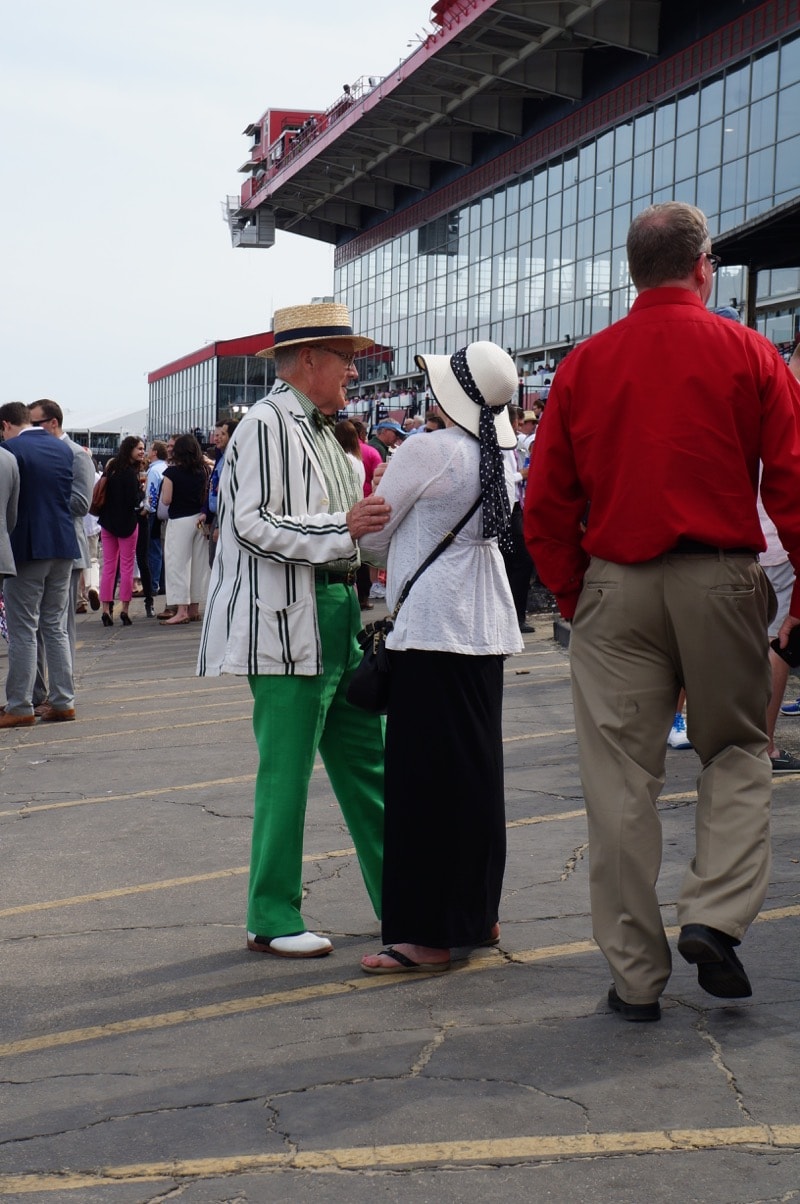 3. It’s not about the food but it IS about the drinks!

With everyone looking so fancy, I was looking forward to sitting down for an elegant meal. Alas, it was not to be. You can actually bring your own food with you (in clear bags) but we were happy to grab some grub from food trucks and concession stands. In trying to keep with the Maryland theme of the day, I opted for a crabcake sandwich (Maryland-style, of course) for the bargain price of $10. The food was secondary to the drinks, however. You couldn’t walk more than twenty feet without being presented with the drink of the day, the Black Eyed Susan. When I asked the various vendors what exactly was in a Black-Eyed Susan, they all confirmed whiskey but the recipe changed depending on who I was talking to. I may or may not also have vodka, pineapple juice, and triple sec. In other words, a few of these and you won’t care which horse wins.

I, on the other hand, made a more sensible choice and sipped from the Flute Club, which basically meant unlimited mimosas. (And yes, there is such a thing as too many.) 4. If you’re not from Maryland, you won’t quite get it.

So what’s with the Black-Eyed Susan references anyway?

It happens to be the Maryland state flower and a source of pride and inspiration. While waiting in line for my crabcake, a woman from Colorado asked me what the difference was between a Sunflower and  Black-Eyed Susan. I looked at her incredulously and said, they’re totally different flowers!

I’m sure that didn’t answer her question but she was more interesting in understanding what was up with this hair. This is what we call “Hon hair”. No, it’s not real. It’s a hat/wig/contraption that represents the kitsch of Baltimore (if you don’t know what I mean, be sure to watch native Baltimorean Jon Waters’ version of “Hairspray”).

And if you looked up in between races, you’d also see a demonstration by the U.S. Air Force Wings of Blue Parachute Team with the final jumper showing his Maryland pride. The first race at Pimlico was in 1870 so it has a longstanding tradition in Maryland but the course is definitely showing its age. There’s talk of Preakness temporarily moving to another race course but no worries – it will still be in Maryland and I predict it will be for a long time to come.

5. Betting is not my thing.

In between the eating and drinking and fashion policing, I actually watched a few races and even bet on a few. Here’s what I have to say about that.

Don’t take me to Vegas.

Although Dan from America’s Best Racing gave me a quick introduction to the intricacies of picking the winning horse, I decided to make my first bet on a horse with 15-1 odds. I figured he had a good chance of garnering a first, second, or third spot and allowing me a nice return. The return I got was zero. Not only did I bet on the wrong horse but he came in LAST PLACE.

So I bid adieu to the racetrack with only $10 lost in total and decided that betting is not my thing. If you’re thinking about going to the races, I’d definitely get your education before you go. And I’d definitely pick a day like last Friday. It was a lucky day if for nothing else than the weather.

Gearing up for Preakness at Sagamore Farm

Watching Netflix Together and Starting Conversations

Blue Moon Rising: Vacation in a Tiny House in Deep...

What to Do with your Family in Deep Creek Lake,...

I don’t know what I enjoyed more. Going to the races or dressing up for it!

I don’t know what I enjoyed more. Going to the races or dressing up for it!

This year was my first preak and I also learned a few things:
1) You see almost zero horses at the infield fest
2) I ate zero good food because of the infield fest
3) I am also very bad at betting on horses and lost some as well.

Our seats were on the apron and I really only got a glimpse of the horses as they went galloping by. And the food was definitely disappointing, But I know next year, I’ll walk away a WINNER!

Our seats were on the apron and I really only got a glimpse of the horses as they went galloping by. And the food was definitely disappointing, But I know next year, I’ll walk away a WINNER!