The Road Less Traveled in the 2017 Subaru Impreza 2.0i Sport

Subaru provided me access to the Subaru Impreza for a week and provided compensation for gas. All thoughts and opinions are my own. Let’s play a quick game to test your knowledge about cars.

1. Name all the models that Subaru makes.

2. Now name a Subaru model that’s NOT an SUV.

Let me guess. You got as far as I did. You came up with the Subaru Forester and the Subaru Outback and maybe you even mentioned the Subaru Crosstrek because it was on your short list last year when you were looking for a compact SUV.

But if you came up with the Subaru Impreza, color me impressed. Because when I mentioned that I had a 2017 Subaru Impreza 2.0i Sport heading to my driveway to my friends (even those that know about cars), they all said pretty much the same thing, “Which one is that?”

And I responded, I think it’s a sedan. Then I googled and said, Oh, wait. I think it’s like a sporty hatchback.

At this point, I recognize that I must sound like a buffoon who is putting her car cred into question. Why would I even say yes to a car I know nothing about? It’s because I love discovering new cars.

Here’s the truth about the Subaru Impreza.

It not only is a sedan but it’s considered a compact family sedan and it has some pretty impressive features. But you don’t really discover that until you take it on an adventure. So we started our week with a typical summer activity – a night at the county fair!

My sister and her husband met us at our house and I volunteered to drive out group of five to the fairgrounds. I wasn’t even worried about driving this sedan across the grassy fields (that were most likely muddy from the rain the day before) because the Subaru Impreza comes as an all-wheel drive standard. We went go to the fair only once per year and we usually make it this one. We know they’ll have all the things we love: fried food, cute animals, and freak vegetables! After the fair, I started making bigger adventure plans for me and the Subaru Impreza. I like to take it on the road to see what it can really do and I wanted to go further than the 10 mile commute to the local county fair.

So I had the day planned for Evan and me. We’d wake up early and hit the road to Alexandria, Virginia and visit Mount Vernon, the home of George Washington. I hadn’t been since I was a kid and with our love of all things Hamilton, we both wanted to check it out.

Unfortunately, that day decided to be a big, soggy mess. And since most of Mount Vernon requires walking the grounds, I had to quickly come up with some alternative plans to make our driving trip still feel like an adventure.

First stop: Take Evan out to lunch at one of my new favorite restaurants, The Great Sage. It was his first all vegan experience and he didn’t hate it!

(if you look closely, you’ll see another Subaru was parked for lunch as well – great minds!) 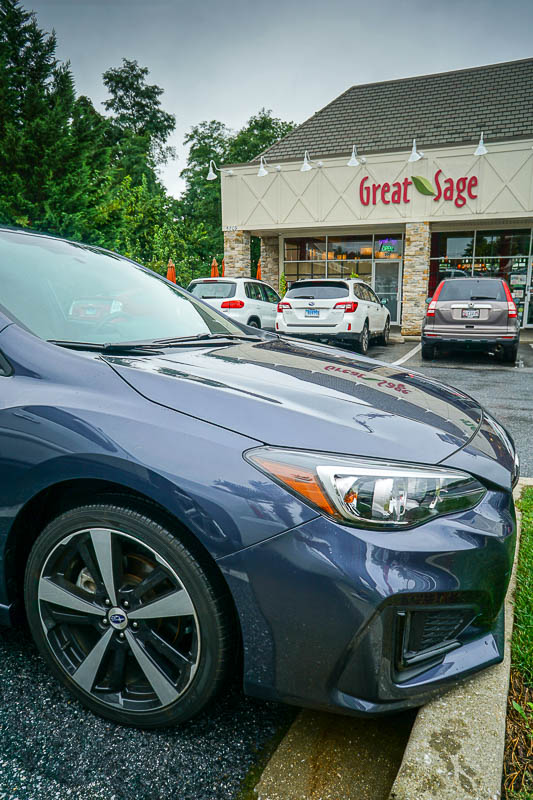 We both loved my Spicy Tofu Stir Fry and he like his Vegan Nachos but we were running late and decided to take our vegan dessert on the road. In case your wondering, the carrot cake is AMAZING. What were we running late for? Well, I decided to be a tourist in my own town and head to the nearby NSA. They actually run the National Cryptologic Museum onsite. Just be sure to follow the entrance directions closely. If you pick the wrong exit, you may be greeted with guns (true story!).

Inside this free museum, we discovered the secret code of the hobos used during the Depression and we had a chance to create and decode our own message on the Enigma, the machine used during World War II by the Nazis. After our short visit to the museum, we pulled into an old service station right around the corner that was no longer in use to snag a few pictures. But we quickly felt like we were in the wrong place at the wrong time as two cars pulled up, open their trunks, and started making a deal.

I watched closely to see if there was any arms trading going on but it looked like someone was simply selling their golf clubs. Or so it seemed.

So we headed to a nearby park where the rain had magically stopped!

As I really explored the exterior, I couldn’t help but think that this is a very average looking sedan, and there’s nothing wrong with that. But maybe I didn’t know about the Subaru Impreza because it’s never really caught my eye.

Except for those rims. Those 18 inch alloy wheels are sick, if I were the kind of person to say something was sick. The Subaru Impreza comes in a standard, sport, and premium trim. In comparing the three, the Sport trim is what I’d choose as it’s similar to the Premium (you have to upgrade for a few extras) but it’s just a little, you know, sportier.

It was inside that I fell in love, though. But not for the reasons you might expect.

Getting behind the steering wheels is what sold me. I immediately felt at ease  and in control (I’m short – this matters). And you had your choice of several displays of information – in between the gauges on the dash, mounted at eye level in the center of the dash, and on the STARLINK 8.0″ Multimedia Plus System. I never thought I’d actually care that much about a display but the super responsive, high definition touch screen is one of the best I’ve seen. Add in Apple CarPlay and Android Auto as well as other apps like Pandora, and you’re set. In the back, there was not only plenty of room for three people (we fit three large people on the way to the fair), but plenty of cargo space in the trunk with fantastic extended space when the rear seats were folded flat (a super easy process). But the driving experience is what set this apart for me. It wasn’t the driving, per se. With 152 hp and 145 lb-ft of torque, you’re not in danger of getting smoked in the road out there. In fact, it was a little sluggish at time.

The cabin, however, was so open and full of light, which I attribute to the aerodynamic shape of the long windshield, large passenger windows, and side windows by the pillars, that I had some of the best visibility I’ve ever had in a car. Here’s the best part. This model starts at only $21,995. This particular car was been upgraded from a manual transmission to a Lineartronic CVT for $800 and EyeSight Drive Assistance Technology, moonroof, and harman/kardon audio system for an addition $2945. Total MSRP comes in at a cool $26,560.

Decided to put this on your short list? I walk you through more details right here in my full video review.

Catching Midnight and the Total Solar Eclipse with Nissan in Nashville

First Look at the 2018 Toyota Camry