Did I ever tell you the funny story about the time I went to BlogHer in San Diego? It was 2011 and I brought my family along for the ride. I got to attend the conference, they got to tool around San Diego, and we all got to cuddle together at the end of the night.

He found a skateboarding shop.

I should have known better.

One morning, he got up early and got ready for the day, an unusual feat in itself. Then he graciously offered to run to Starbucks to get me a Chai Tea Latte. What a darling husband! But I had my suspicions.

Sure enough, he shows up an hour later with a “longboard.” A term I didn’t even know existed. My first question was how the heck he was going to get that home. He shrugged and said he’d somehow shove it in the suitcase.

Turns out the longboard was just a bit too long for the suitcase and he had to hand carry the item home. Instead of thinking he’d feel humiliated for carrying it, he got a lot of chatter from passers-by that sounded to me something like, righteous board, bro!

We made it home. IT made it home and to my surprise, despite his advancing age, he’s GOOD at that thing! He can really ride! And I’ve never seen him fall. And then he ordered another one.

Don’t ask me to understand.

And then the inevitable happened. He wanted to show my son. My scared-to-ride-a-bike son. My I-can’t-balance-myself-on-anything son. And they played around but that was it.

This week, though, I had the chance to go skateboard shopping. I wasn’t headed to a skate shop in San Diego but across town to Walmart. I know, I know. Quite the contrast but I figured this extra skateboard was going to be for me (okay, stop laughing) or for my 5 year old son. This was just our speed.

I also know, though, from being married to a skatenerd that the quality of the board and the way the wheels roll are super important. So out of all of the skateboards in Walmart, we went right for the pro version from the Shaun White Supply Co.

At first I was like, Wait, isn’t Shaun White a snowboarder? And then I was like, These are skateboards for kids and it’s all kind of the same, right?

So with my son in tow, we carefully examined our design choices: I let my son make the selection (heavily influenced by mom), picked up some safety gear, and off we went.

Surprisingly, my husband had no problem getting out his boards and spending a little family time outside. In fact, we tried to look like a totally rad family with our boards. Okay. Perhaps I look a little dorky. But we still spent some quality time. And by quality time, I mean my husband showing my son how to carefully balance on the board. 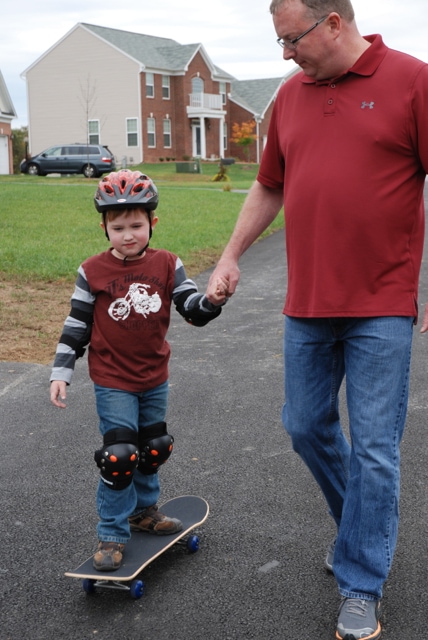 And then things got a little crazy. and my husband going pro on us. In the end, I think my instructions proved to be the most valuable. And we all walked inside feeling a little more rad than we did before. Disclosure: I am a member of the Collective Bias™ Social Fabric® Community.  This shop has been compensated as part of a social shopper insights study for Collective Bias™ and Shaun White Supply Co #CBias #SocialFabric. All opinions are my own. Check out more skateboard info by following the #ShaunWhiteSupplyCo hashtag on Twitter.

International Day of the Girl: A Little Girl’s Dreams

That’s so much easier. I have a much shorter distance between me and the ground.

Duuuude. I kind of want to have a family skateboarding day now. This look awesome!

DOOOOO ITTTTTTT! Just wear protective gear (or lay down on your belly!)

duude, I wanna see ya get air and catch an ollie on a half-pipe.
(that’s all i know)

Can I just say RIGHTEOUS? I feel like that’s more of a surfing thing but that’s as good as I can do.

your version looks the funnest!!! 🙂

And the safest! (for me)

This is so cool. I used to skateboard a little when I was younger. The Shaun White boards look pretty cool.

I used to skateboard too. On my belly. Some things never changes 🙂