Disclosure: Nectar provided me with a complimentary mattress to facilitate this review. All opinions below are honest and truly my own. If you decide you’d like to try a Nectar mattress, I’ve used affiliate links in the post below. How many mattresses does one family need? Oh, how I wish that was a rhetorical question. It’s a real one and it’s one I’m plagued with because I always seem to have mattresses to spare.

Each mattress is actually different and as a result, I’ve been able to compare many over the years, including my latest adventure with a Nectar mattress.

But before we get to that, see if you can follow my timeline.

Pre-2000 – Had my single girl full-sized Serta mattress, which worked just fine for me

2000 – Married my husband and spent a year on the hardest, springiest queen-sized mattress, moved Serta to the guest room

2010 – Won a Tempur-Pedic queen mattress, gave my son the Serta, put the Sleep Number in the guest room

2016 – Moved the Serta to another guest room, placed a GhostBed mattress in my son’s room (review)

Did you keep up with all of that? That’s a lot of mattresses in a short amount of time. And we didn’t get rid of the Tempur-Pedic mattress because we didn’t like it. Well, that’s not entirely true. My husband never loved it and with room for only one queen-sized guest bed, he chose to keep the Sleep Number bed.

All of that to say that when I was invited to review a Nectar mattress, I thought it was the perfect opportunity to not only try a mattress that we both might like but also UPGRADE, BABY!

Honestly, when we bought our first bed together, we didn’t like the idea of a king-sized bed. We’d be so far apart! We wouldn’t be able to snuggle! After 17 years of marriage, we can still snuggle but I also like to be able to go to my corner and he can go to his. So a king-sized Nectar mattress was the catalyst for a major bedroom transformation. And we needed it.

There is no shame in my game. We’re slobs. Not everywhere and not all the time but usually in the bedroom because it’s where we spend the least amount of time. I was in need of a makeover. The mattress, as you see it here, is how it arrived on my front porch. On the day it was delivered, it was a rainy mess and I was worried that perhaps some water had gotten in. No worries though because inside this blue bag (which probably has a million other uses but I can’t think of any that might be legal) was another “carrying case” for lack of a better term. “Carrying case” for the Nectar mattress

And inside THAT was the mattress all nice and neatly vacuum sealed. We pulled it out, placed it on the bed frame, used the safe plastic cutter that Nectar provided, and let that mattress come to life! Nectar also sent two complimentary pillows along with the mattress which makes it a little easier to see the compression when it’s first released from the packaging. If you were in a crunch, you could technically go ahead and lay on the mattress (check out the side view below and you’ll see that it still has a fair amount of initial expansion) but it’s best to wait a few hours for full expansion. 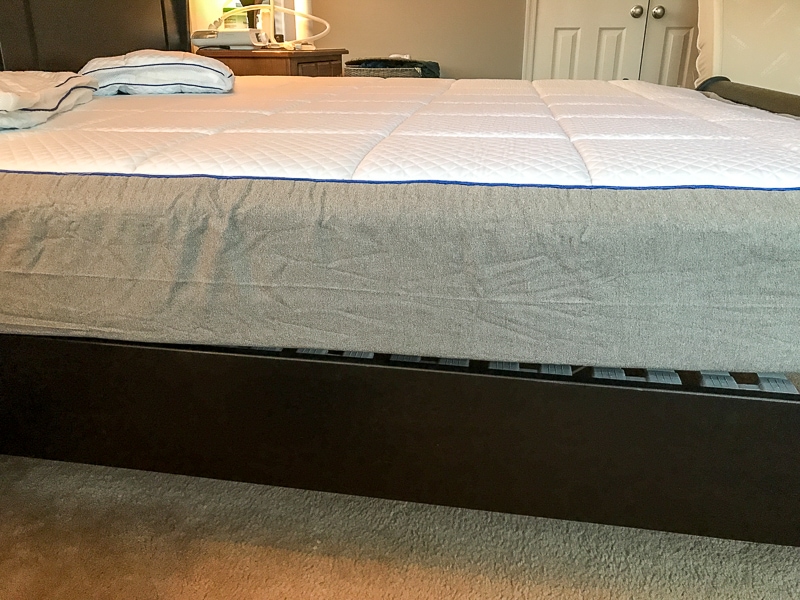 Just after the initial expansion of the Nectar mattress

We probably waited about 3 to 4 hours before making the bed and giving it our first sleep run. And now you must have some burning questions. I’ve anticipated that.

What were your first impressions of the Nectar mattress?

When I first sat on it, I thought it seemed really soft. Now, that sounds like a good thing but I was worried it would be too soft and wouldn’t feel great on my back.

How did you like sleeping on the Nectar mattress?

After just a few nights, I’m amazed at how my body feels cushioned when I sleep and is ache-free when I wake.

Did it have any weird odors?

Yes, there’s a mild odor that some people detect that fades pretty quickly. Honestly, it smelled like cocoa powder to me.

How did it compare to your Tempur-Pedic bed?

It’s a totally different feel and it will take some adjusting but the fact that I woke up with no aches or pains tells me it was time for a new (or different) bed.

I have up to 365 days to fully decide if I don’t like it in which case I could return it as part of Nectar’s 365 Day Guarantee.

How does it feel sleeping in a king-sized bed?

Um, why didn’t we do this sooner?

Can I buy one easily and online?

Of course you can! Their current offer ranges from $500 to $900 (plus two pillows) with free shipping. Find out more about the Nectar mattress here.

Did you ever get your room back together? New bedroom with the Nectar mattress

Want to see the whole thing in action? Here’s a video that shows you exactly how I got my bedroom to this point!

Winchester, Virginia is the Little City with a Big Past

Awesome post – mine is arriving tomorrow, but my bed frame isn’t assembled yet, lol. My boyfriend and I hauled it up the stairs on Tuesday though.

This is actually going to be for the 2nd bedroom in my condo (guest bedroom) so we’ll see if I like it or not 🙂 and if I like it a LOT I may poach it for my own bedroom, lol. I got a queen-sized because I didn’t think a king-sized would fit in that bedroom.

PS I love the video!

Ooh okay. How long did it take you to assemble the bed frame you bought too?

Probably about 5 episodes of The Walking Dead… so a LONG time! It was from IKEA but it’s pretty solid!

Oh wow! I ordered one off HomeDepot.com (I saw it on Amazon, but they were quoting me like 10/10 for a delivery date which is crazy). Hoping it won’t take 5 hours to put together lol …

Great video! We just ordered a Nectar a couple of days ago and I can’t wait for it to be delivered. Probably three week :(. I have been really happy so far with their CS as I have had a million questions. I spent quite a bit of time researching memory foam mattresses (and others) before deciding on them. Fingers crossed it helps my low back and shoulder pain that pops up occasionally from being 55 and doing Crossfit 4-6x week.

I noticed this was from September. Curious as to how you like it currently. Still loving it?

Thanks for asking! Yes, I’ve been sleeping on it since September. We’re now nearing the end of November and I still love it. My sister just visited at Thanksgiving and was so interested in our mattress. She’s only had a memory foam topper and didn’t like it but really liked this bed!

Hi, i found your video when i was researching the nectar mattress. How are you liking it now. I need a new mattress and i think your video has convinced me.

Hi Carla – we’ve been sleeping on the mattress since September of last year. It’s now 5 months later and I STILL love my bed. I travel a fair amount and I look forward to coming home because I know I’ll get a good night’s sleep. I have no regrets. I just wish my sister has listened to me instead of spending a forward on a spring mattress that’s so stiff!

Thanks for tge reply, i bought it sunday. Cantt wait for it to get here.

I ordered a Nectar mattress after some research online (and a recommendation from my sister’s friend) and it is scheduled to arrive tomorrow. I’ve really heard/found nothing but good things on this mattress so I have high hopes although I am worried about the softness (I like a firm mattress).

We’ll see how it goes. Very happy you love yours!

It’s soft but not mushy. I still feel adequately supported and no complaints from my husband! Hope you like it!

How long did it take the ends of the mattress to fully expand? Been about 32 hours and ours still hasn’t expanded.

I can’t say for sure because after we waited a few hours, we put the sheets on it and never looked back. You may just have to sleep on it for the foam to evenly expand.

Do you still love it a year later? Do you notice any weird wear, sagging, etc? A friend of mine had the Leesa and it basically turned into a foam taco, so am trying to figure out if this one holds up better. It should based upon their guarantee, but sometimes things only last as long as the trial period and then fall apart. Thanks for your feedback!

I have absolutely no complaints. My husband is a big guy so if any bed was going to turn into a taco, it would be ours! I honestly haven’t noticed any wear or tear or sagging. I’m still just as happy with it a year later. Now, my bedframe from IKEA is a difference story… ?

I appreciate your feedback. Ours is supposed to arrive on Monday and I can’t wait to try it!