I hate clickbait titles like the one I used recently – Will Bad Moms Christmas become a new holiday classic? But to be fair, I answered the question pretty quickly by telling you it’s not movie you want to pop into your DVD player every year as you decorate the tree.

But hold on, because I have a recommendation for one that will fit the bill.

I’ll admit that I watched Daddy’s Home, the first movie in this franchise starring Will Ferrell and Mark Wahlberg, one lonely Friday night at home when my family and I couldn’t find anything better to watch. And it was funny. Silly and stupid but funny. Like, guilty pleasure funny.

So when I had the chance to preview Daddy’s Home 2, I thought I’d be in for the same. Nice, entertaining, silly stupid comedy. 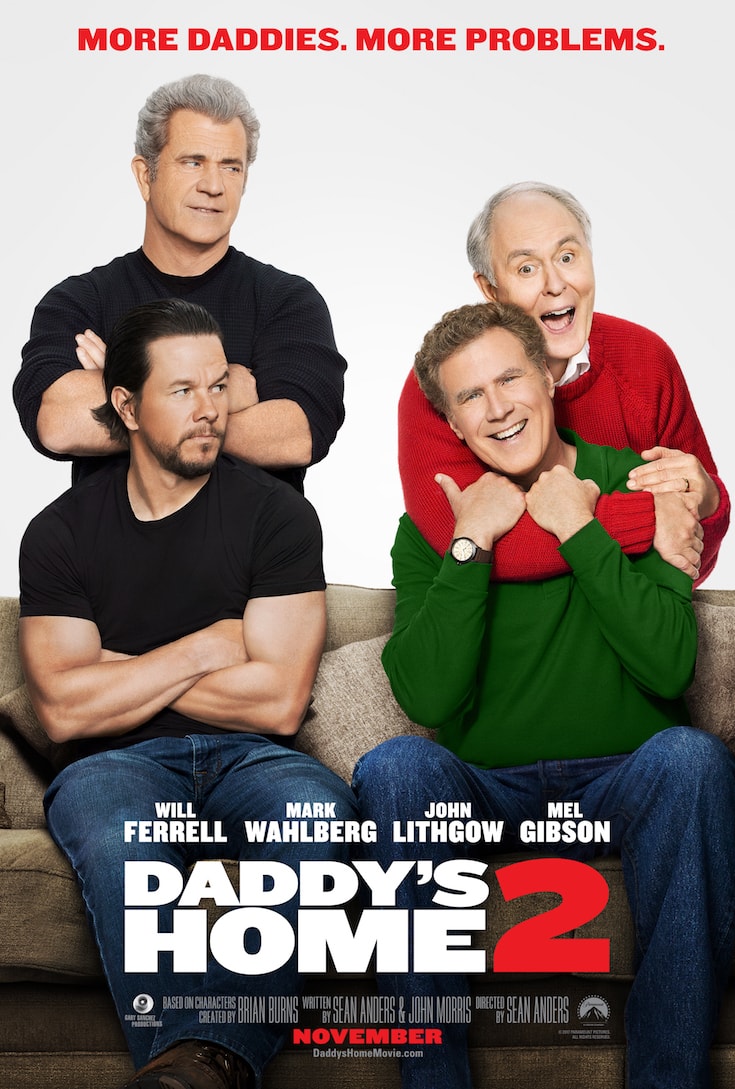 Instead, I did find my new holiday classic. And I can’t believe I’m saying this, but Daddy’s Home 2 could be the Christmas Vacation of this generation.

Will Ferrell and Mark Wahlberg reprise their roles as co-dads, Brad and Dusty. Brad is now married to Sara (Linda Cardellini) and helping raise Dusty’s kids as the sensitive yet affable stepdad. By the end of the first movie, Dusty has moved down the street and married superhot Karen and is now also a stepdad to her daughter.

Oh, it wasn’t an easy road to get to their happy co-dadding but that’s the basic premise of Daddy’s Home. Fun but predictable entertainment.

In Daddy’s Home 2, we see that Brad and Dusty are nauseatingly cooperative in co-parenting the kids and decide to have a “Together Christmas” so the kids don’t have to shuffle from one house to the next. The only complication is that Brad’s dad (John Lithgow) and Dusty’s dad (Mel Gibson) are both coming to town.

I know what you’re thinking. There is actually nothing original about this idea. Opposite-minded people are thrust into an awkward situation and hilarity ensues.

That’s pretty much the gist of it but for some reason it just works.

Will Ferrell is so committed to his role as the submissive Brad that he’s so endearing, even when he’s locking lips with his father, an even more sanguine version of Brad. And John Lithgow, who I normally can take or leave, is absolutely hilarious as the dad you’d expect Brad to have.

On the other hand, Mark Wahlberg’s role has changed. He now embraces his passivity which only serves to contrast his gruff and macho father, a more exaggerated version of the old Dusty. Mel Gibson, who Hollywood can normally take or leave, plays the role of off-putting jerk to a tee.

When everyone comes to town, there’s a last minute decision to rent a huge cabin in the mountains courtesy of AirBNB and when they all get there, you guessed it… HILARITY ENSUES!

There are actually a fair amount of similarities between this movie and Christmas Vacation. Not so many that it feels like knock-off but enough that purists will see where much of the inspiration came from.

In the end, we’re still stuck with some unlikeable characters but you get the heartwarming and hilarious ending you need this time of year (including John Cena!). Although it’s rated PG-13, this movie is fine for kids over 10 (and maybe even as young as 8, if you’re a little more liberal). The few adult references will probably go right over their heads anyway.

My only complaint? They should have named it Daddy’s Home for Christmas so that this can easily be identifiable as a movie to add to your holiday collection instead of a just a sequel that might get lost in a sea of mediocrity.

Just Dance 2018 Will Have You Dancing All Over the World

I’m sorry, I have to. First off, it’s spelled Ferrell. But second, any support for Mel Gibson – especially in light of what is going on in this industry right now — is an affront to women and, frankly, Jewish people.

I must have been thinking of Frank Farrell, my second grade crush.

As for the rest, we all pick and choose where we lend our support and how we get our entertainment. From what I’ve been reading, there isn’t much left to watch in “good conscience” anyway.