Why You’ll Fall in Love with the Hershey Theatre Do you know what the busiest drinking night of the year is? It’s Thanksgiving Eve.

Do you know what I was doing on Thanksgiving Eve? If you said drinking, you’re partially correct.

An Evening in Hershey because why not?

Last November, I was having a pretty good night. I was driving my Chrysler Pacifica, hanging out with my friend Cara, and eating and drinking at one of the local favorite spots in Hershey, PA. We actually were purpose-driven that night. We traveled to Hershey for a night at the Hershey Theatre to catch a performance of The Book of Mormon as media guests of Hershey Entertainment and Resorts. We tried to plan ahead so we’d have time for a quick dinner before the show and decided to drop in to one of the local restaurants, Fenicci’s of Hershey. Little did we know that this was a popular pre-theatre venue for dinner and the wait was long. So long, we almost headed out the door but on a whim, we decided to act like two single ladies and mosey on up to the bar. A lovely gentleman offered to move down so we could have two seats together. We thanked him profusely and ate our fantastic meal.

If the evening had ended there, I think we would have been happy. Because we noticed that the gentleman next to us seemed to know everyone in the place. I teased that he must be a local celebrity. He told me that he lived in New York but still kept a place in Hershey as he had grown up here.

What a nice story, I thought. And then once he left, the other guy next to us said, Do you know who that was?

His name was Ernie Accorsi, former manager of the NY Giants. A local celebrity indeed!

What also caught me was the conversation Ernie was having with the staff behind the bar. They were talking about how they would be working the next day to ensure the cast of show at the Hershey Theatre had a full Thanksgiving meal to enjoy.

Even the Great Depression needs a theatre

Actually, what is today, the Hershey Theatre, wasn’t even built originally as a standalone theatre. It was built as part of a community center and, man, what a lavish community center. What made it so remarkable though is when it was built. While the plans were drawn up in 1915, it was actually built between 1929 and 1933 as part of Hershey’s “Great Building Campaign.” It was during that time that he kept many men employed with the construction of the Hotel Hershey, the Hersheypark Arena, and Hersheypark Stadium.

Not only is it architecturally impressive and reminiscent of a bygone era (there’s rumor of a swimming pool in there), but the interior is historically beautiful and more lavish than you would ever expect from a “small town theatre.”

An architectural dream inside the Hershey Theatre

Although I visited the Hershey Theatre recently for one of the many award-winning, Broadway-style shows that frequent the facility, I was able to sneak backstage.

Okay, I didn’t sneak. It was part of a tour I attended (you can too!) that was well worth the time for both history, theatre, and architecture lovers.

Originally, you would have entered from the street and been greeted at the Ticket Office window. Theatre is actually a much bigger and more complicated business now so this box office is permanently closed with patrons entering from the rear of the building. Regard;ess of which side of the building you enter from, the view of the lobby is the same. And it’s grand. Your eye is probably immediately drawn up and that’s by design. Ceilings are everything here. If you think that looks like gold leaf, you’re right.

And that’s just the lobby.

For the history buffs

Although the entire theatre is like stepping back into the Thirties, the still-standing throwbacks to the era are what caught my eye.

For example, the men’s restroom is more than just a place for the, ahem, facilities. You’ll find a front room, once equipped with a working fireplace, that was reserved as a men’s smoking lounge. But the men weren’t the only ones who needed a lounge. Just inside the women’s restroom, you’ll find a fireplace-laden lounge, not necessarily for smoking. Here, you’ll see a water fountain and a little door on the right that was used as a phone closet. That’s a trend that perhaps we should bring back. Especially for the theatre nerds

The Hershey Theatre is really about the theatre. With a varied history of performances from vaudeville to movies to national Broadway tours, the stage has seen its share of stars over the years. 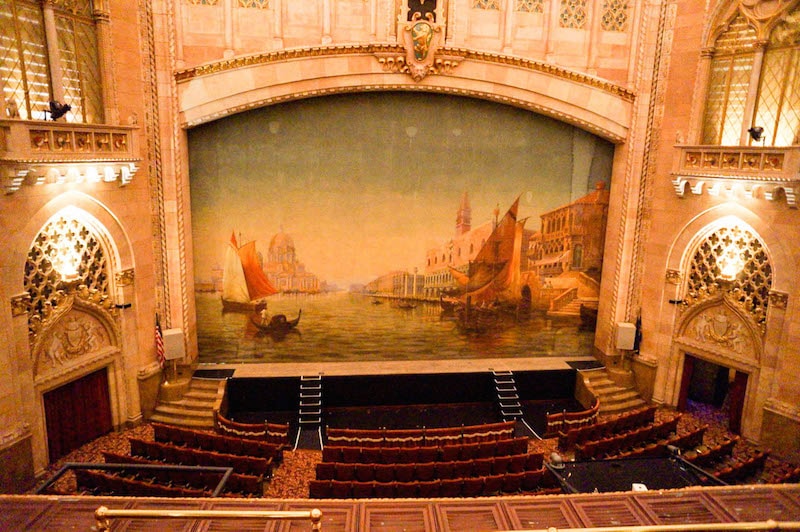 But behind the scenes is where the magic happens. And I had a chance to see it all. It’s a huge stage with elevators and pulleys and an incredible sound system – all of which make it an attractive venue for major shows.

Standing backstage and touring the dressing rooms and the “green room,” I was in theatre nerd heaven just thinking of all the greats who had stood right where I had. Worth the drive to Hershey Theatre

While it may seem crazy to make a long drive the night before Thanksgiving for a few hours at a show, I think it’s crazier to go shopping the next day.

The show was amazing (though definitely not for everyone!) and the packed house seemed to agree. We even overheard fellow patrons saying they had driven from Philadelphia to see the show. It’s truly a one of a kind theatre and definitely worth the drive for me to see any number of their upcoming shows. And if theatre isn’t your thing, tap into your inner historian or architect and spend some time just soaking up another marvel of the little town called Hershey.

4 Bingeworthy Shows on Netflix to Start Your Year Off Right

How to Have an Excellent Girls Weekend in Durham, NC