I TRIED IT! Putting the American Wave in my Hair
CoolSculpting Part 3: The Results!
A Young Life Stolen
CoolSculpting Part 2: The Recovery
Eat, Drink, and Be Merry in Harrisburg and Hershey, Pennsylvania
CoolSculpting Part 1: The Procedure
Sorting Out the Timeline in the Netflix Original DARK – Season 1
Surviving and Thriving on the 21 Day Keto Reset Diet
Lessons Learned from My Thyroid
Big Apple Circus Makes It Okay to Love the Circus Again
Car Events

I’m always up for an adventure if I can swing it with my schedule. So when my “Save The Date” email arrived from Volkswagen touting the 2016 VW Passat reveal in Brooklyn, NY, I quickly penciled in the date on my calendar. I was hoping I could go but my husband has a new travel schedule so I knew it was iffy. And it was a Monday night in New York. But then the actual invitation arrived.

So off I went for a quick trip on a train up to New York City at the expense of Volkswagen.

Amtrak is actually my favorite office. I have a roomy, comfortable seat. I have power outlets. And, thanks to my mobile hotspot, plenty of my own wifi. It’s the perfect combination for me and my laptop.

While on the train, I started putting myself into car mode and thinking more about my role at SheBuysCars. Then I thought about it. Cars, Volkswagen, news, the HUGE recall for their diesel models. This was a such a big story and we hadn’t covered it. So I put myself to work researching and writing about what it all means to the average car buyer (spoiler: you’ll probably be able to get a great deal on VW these days).

I also kept in mind, while on the train, that I was writing about a negative news story for the very brand that invited me to New York to celebrate the launch of the 2016 Passat. Talk about a tough row to hoe, or whatever that saying is. But it was a great story for me to write before the trip because I knew all about the very big elephant that was going to be in the very big room.

The train pulled into the station and the adventure began. I shared a car with Byron Hurd from Left Lane News (a VW Passat, natch) and we quickly dispensed with the formalities and dug right into the conversation.

Would VW address the diesel recall during the event that night?

Would they make a brief mention and gloss over it?

Would they face that elephant head on?

Honestly, I was rooting for the last one but since I’m not a public relations expert, I really just wanted to attend a fabulous party with great food and drink, great music, and, of course, a great car. At around 6:30pm, we boarded a large water taxi and made our way down the East River and over to the Duggal Greenhouse in Brooklyn. I had asked someone from VW earlier in the day if there was a particular hashtag for the event. She laughed and told me it was #NewPassat but not to worry because it would be pretty obvious to me once we got to the event space. Right, she was.

We mixed and mingled with hundreds of other invitees, some auto journalists from out of town, some lifestyle bloggers from in town, and a lot of people that just seemed to be there for a good time. We were greeted with amazing appetizers and drinks and they made sure we were never in need of anything. Whether this was VW staff or event staff, I’m not sure but kudos to both of them.

Shortly after 8pm, the event began in earnest when Michael Horn, Chief Executive of the Volkswagen Group of America, took the stage to address the crowd. And he took that elephant head on:

“Our company was dishonest, with the EPA and the California Air Resources board, and with all of you and in my German words, we have totally screwed up.” A simple apology isn’t enough to repair the damage caused but it was certainly a perfect first step in damage control. He stated how they will work hard to gain back the trust they’ve lost and then smoothly transitioned to the real events of the evening.

After introducing us to three different Passats (two of which drove onto the stage), he highlighted some of the standout features like Car-Net App Connect – FINALLY, a system to bring your smart phone apps onto your car screen LED Lights – It may seem small but lighting makes the vehicle! And you put it all together for one beautiful car, inside and out. 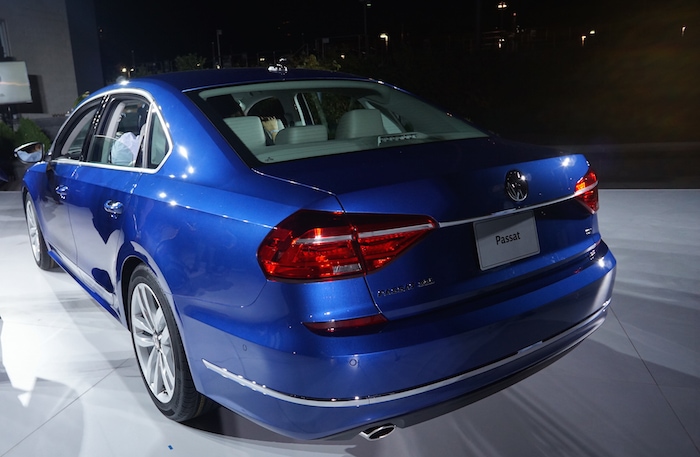 And what better way to top the evening than to simply kick back and enjoy a private concert by Lenny Kravitz. The View from the Left Side of the Train