How to Get Your Kids Interested in Fire Safety

If your children attend public schools in the United States, I can guarantee that this week they’ll be participating in fire safety activities. Sponsored by the National Fire Protection Association, October 4th is the start of their annual Fire Prevention Week. And boy, do I know it well.

One of the other hats I wear is a fire hat, metaphorically speaking. I work with one of the local fire departments on many social media related projects so while I don’t fight real fires, I know a lot about them. I’ve heard first hand stories about families whose homes (and lives) were saved as a result of sprinklers in their homes. And unfortunately, I’ve heard the all too familiar story of someone whose home did not have a working smoke detector and their fire story did not have a happy ending.

These stories impact me because I get to see a lot of behind-the-scenes photographs and it’s real to me. But to my son, sometimes fire safety is just another thing you have to do at school or talk about at home.

But I’ve discovered a couple of cool ways to get him interested in fire safety and I’m here to pass them along to you. Because everyone’s story should have a happy ending.

Reinforce what they learn in school

Three years ago, when my son was in kindergarten, he came home and showed me drawing he had done for Fire Prevention Week, the theme of which was (that year) “Always have two ways out.”

Not only did I praise him for a good drawing a good job but I realized that we had never discussed how to get out of the house. And in following years, we followed up with his lessons at school by talking about a designated meeting place. The lessons in school aren’t just to check a box. They’re good food for thought for them AND you.

Tell them stories from your youth

You know you did stupid things as a kid, right? Why not let your kids learn from your mistakes? They like to hear stories about how you were just like them. You did stupid things. You (hopefully) didn’t burn your house down. You got in trouble. You learned your lesson. 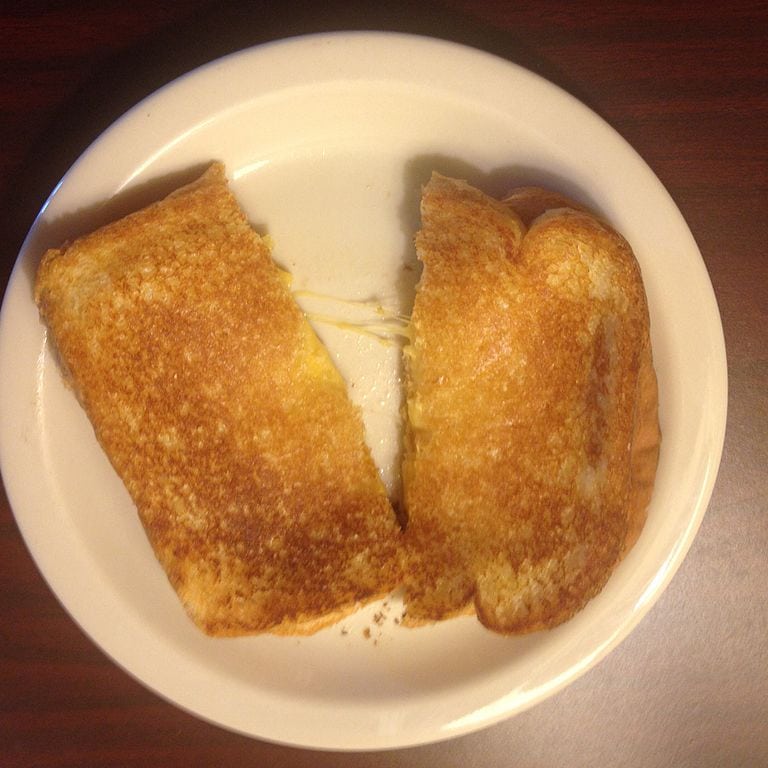 Not my actual toasted cheese sandwich but you get the idea.

I have such a story that my son loves to hear and it involved my love of cheese. I really really wanted some melted cheese (a toasted cheese sandwich was a staple in my house) but we had no bread. So, like any child with creative problem-solving skills, I placed a piece of cheese on a paper towel and placed it in the toaster oven to broil.

I was so proud of my cheese concoction that I told my mother about it. Thankfully, I didn’t catch the paper towel on fire but let’s just say I never did that again.

Make it a game

I tend to have moments of “microleisure” which is when I take a few moments to myself to relax. And I usually use my phone to play a few games. It used to be Angry Birds. Then I moved on to Candy Crush. Now I spend time building my SimCity and solving word problems on Bonza. And, when someone feels they’re up for the challenge, I play Trivia Crack.

Well, somebody at the NFPA has been paying attention and they must know that kids not only watch us play games but they play plenty of them as well. So they decided to turn learning into a game. Sparky’s Brain Busters is a new app (introduced just a few weeks ago) for kids that introduces familiar subjects like Math, Science, Social Studies, and Fire Safety in a Trivia Crack-like app. The problem with many educational apps is that they’re typically designed for young kids or they don’t really understand the types of games kids like to play. So I reluctantly sat my son down to play with the app and tell me what he thought. And within moments, he was whizzing through trying to get as many characters as he could by answering multiple choice questions correctly. The app is suggested for ages 9-11 and it was the perfect degree of challenge for my smarter-than-his-britches 8 1/2 year old. Not only that, but we had a chance to talk about some historical events that came up during the game, like the Great Chicago Fire of 1871 (spoiler alert: the cow didn’t do it) and watch a great video about the history of it. Whether you’re a parent, a homeschooling parent, or an educator, I encourage you to find ways to get kids interested and involved in learning about fire safety and prevention. And if you’re looking for additional resources, the NFPA has you covered.

Find Sparky’s Brain Busters app on iTunes and on Amazon for Android. Check out the SparkySchoolHouse site for teachers & parents. And check out great lesson plans, videos, and resources for teachers and parents.

This post was sponsored by the NFPA to promote the great resources for parents and kids for Fire Prevention Week. All stories and opinions are my own (yes, I really did put a paper towel in the toaster oven).

The things we do for cheese. ; ) Really cool app and love how the characters are all real historical figures. Too bad they do not have 7 and below app I would play with my boys.

My son is a cheese lover too so my story totally resonated with him!

I melted tupperware in my microwave trying to make caramel popcorn. Ooops! Great app idea to teach the kids!

Every family has a story! My brother put toast in the toaster, then forgot about it and went to take a shower. The toaster was faulty, and it caused a small kitchen fire. It’s so important to talk to kids about fire safety before something goes wrong.

When I taught first grade, I spent most of the month teaching fire safety to my students. We covered it bit by bit and read lots of stories to make them feel confident that they would know what to do in case of a fire and I’m forever a fan of NFPA and their many resources for all ages, including the new Sparky’s Brain Busters app. I tried it and was hooked! 🙂

I think every family has a story. Case in point: I set microwave popcorn on fire as a kid a few times. Love that this app walks kids through fire safety on their level. Thanks for sharing!