In my household, there are two people who love LEGO and one of them is not my husband. It’s my 8 1/2 year old son, Evan (typical), and ME! I grew up every weekend raking through hundreds and hundreds of LEGO that residing in an old, plaid, zippered suitcase. The noise is unmistakable and if you’re a parent, you probably know it as well.

But the difference between my childhood LEGO experience and my son’s comes down to one thing: creativity.

We bought LEGO bricks. We didn’t buy sets. We didn’t create a spaceship from directions and specially molded pieces. We crafted them from our imagination and mostly rectangular bricks. That’s the part of LEGO that my son has been missing and last weekend, the lightbulb suddenly went off. We headed to Philadelphia for a Mom Mixer event held at The Franklin Institute. Seeing that the space looked like a pretty cool science museum and knowing that it would be a dreary day, I forced my son off the couch and into the car for what was sure to be a fun and memorable day.

The museum provided us free admission for the remainder of the day which gave us access to all parts of the museum except the special exhibits. Being that it was the last weekend for what we heard was a phenomenal exhibit, we upgraded our tickets and bought admission to the traveling exhibit called “The Art of the Brick.” 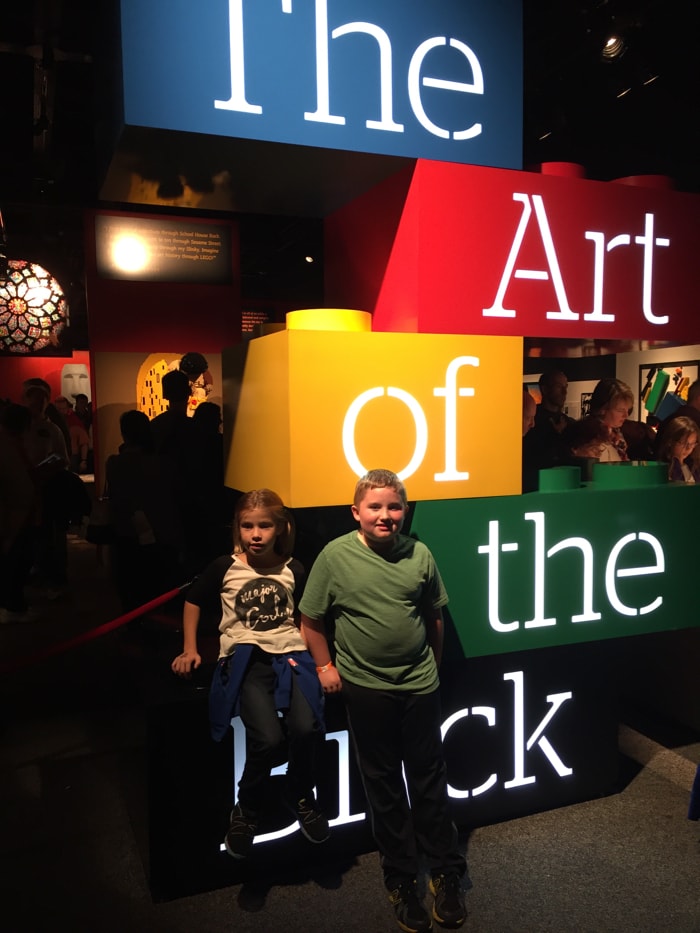 Evan was having such a good time and actually dreading stopping his activities for our 3:30pm entrance time into the exhibit. But once we arrived, everything changed. The Art of the Brick is actually an art exhibition by Nathan Sawaya, a NYC corporate attorney who gave up boardrooms and shuffling papers for the lure of the brick. He’s turned our favorite childhood toy into a true art form. And if you think I’m talking about the cool sculptures you see at the LEGO store, think again. Over and over again, we saw these flawless creations of masterpieces created out of LEGO. So why bother? What’s the point? Not only are the skills and creativity used to recreate these works amazing but look at the photo below.

I saw kids that I doubt would otherwise be interested in art examining everything in detail and even reading the information about the original artists and piece. In addition to the painted masterpieces, Sawaya also recreated amazing 3D sculptures in ways that will make you want to say “YOU GET ME GUM GUM!” Lest you think Sawaya is a great LEGO engineer and not truly an artist, the next few rooms took us through some of his original creations. When Evan really sprang to life, though, was when he saw the dark side of Nathan Sawaya and started to see how he was thinking outside of the (LEGO) box. One of my favorite pieces out of the collection was not only the powerful piece above but the whimsical piece below. Sawaya often makes a pieces specific to the city of his exhibit to leave behind. I can’t think of a better piece to represent Philadelphia than the Liberty Bell with the crack finally fixed. On the way home, Evan recounted how the words that Nathan Sawaya had said in the introductory video we watched before the exhibit had inspired.

ART HAS NO RULES – a mantra I frequently repeat to him that sometimes is in conflict with his elementary school art teacher. But his biggest takeaway is a lasting one.

No set of LEGO is mutually exclusive. Star Wars can combine with Pharoah can combine with Santa Claus and they can all live in the same creative world. It’s a lesson no one had to teach me with my first LEGO set but it’s one my son has finally learned. And it’s opened up a whole new world for him. “The Art of the Brick” exhibit is no longer at The Franklin Institute. We were lucky enough to see it in during its last weekend in Philly. But hopefully you’ll have a chance to catch this awe-inspiring exhibit in a city (or country) near you.

How to Get Your Kids Interested in Fire Safety

FCA found my heart and stuck it in the mud

What I Ate at the Minnesota State Fair