Something you may or may not know about me.

I have wide and varied musical interests.

Back in my formative years, I was a Top 40 girl: Cyndi Lauper, Huey Lewis, The Police, Culture Club. And then my brother introduced me to this new device he had called the Sony Discman.

Wow. Music came to life for me as I listened to a COMPACT DISC for the first time! But my musical tastes were limited to my brother’s CD collection. So I started listening to Thomas Dolby, Howard Jones, Depeche Mode, Pink Floyd, and Yes.

New wave, classic rock girl. That was me.

Then I grew up and started listening to a little bit of everything: opera, classical, alternative, hard rock, soft rock (I worked at a drug store. I had no choice but to listen to Love Songs After Dark every night.)

Now I’ve settled nicely into the singer-songwriter types, like Jason Mraz, Colbie Caillat and more alternative types like Of Monsters and Men. I blame my husband. He’s obsessed with music so he forces me to stay mostly current.

But what would a music collection be without a little guilty pleasure.

Mine is Michael Bublé. Why is that so guilty? Because for some reason, not everyone loves him. I think he makes my husband cringe. I know some people told me they prefer Harry Connick Jr. (like you have to choose one over the other). But if it came down to it, I’d gladly choose. I’m Team Michael. All the way.

Not only do I think he’s adorable (sorry, honey!) but the tone of his voice makes me swoon. And I don’t swoon easily. 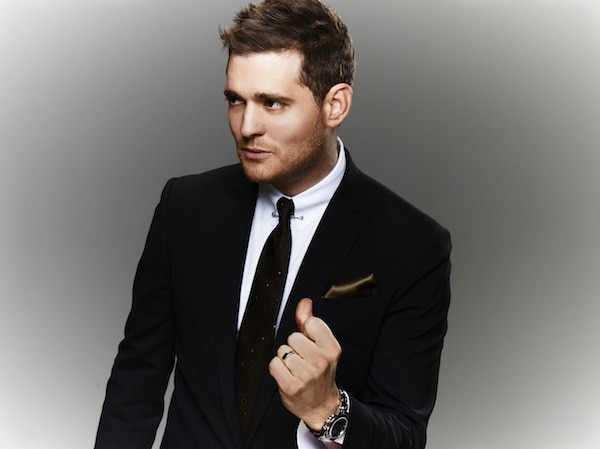 Now let’s get to the music. Yes, he’s know for old school singing. Big band type stuff. It’s not always my favorite but it’s well suited for his voice. And I love that voice.

But he does some original music too. Like super cheesy, bouncy Top 40 type hits like, “Just Haven’t Met You Yet” (which, by the way, I could totally see obsessing over back in my 20s when I was all lonely living in my apartment and dreaming that the right guy was out there thinking these same thoughts).

Or maybe, just maybe, once in a while, I forget that I’m married and think that I’m the girl of his dreams. Turns out he’s married to some beautiful Argentinean actress and seeing as I’m married, I’d say that ship has sailed.

But the man is smooth, no doubt.

And he delivers on his latest album. I know because I had a chance to download a review copy. Basically, I got a generic email from One2One Network with a new project:

SIGN UP HERE to receive a copy of To Be Loved and review it on your blog! All participants will also be eligible for some great prizes.

Not a terribly compelling offer but IT WAS MICHAEL BUBLE so I responded in about .23 seconds. The digital download of To Be Loved includes 14 tracks and I’ll give you my quick rundown of each (since, in this day and age, it’s easy to buy an entire album or just the singles you like).

It’s a Frank Sinatra classic. Michael puts his own twist on it but it’s really Frank’s genre and Michael does it justice.

This is an original song co-written by Michael. It’s what I’d call cheery pop. You won’t sit and mull over the lyrics but you will not be able to resist this one (in the same vain as “Haven’t Met You Yet”)

I kept trying to place who the original artist was on this. I was envisioning a Motown artist singing it. But it’s actual a cover of a Bee Gees song but this arrangement makes it sound like Motown.

Carrying on with the Motown theme, Michael does a cover of the original Smokey Robinson song sung by The Miracles, The Temptations, Jackson 5, and Terence Trent D’Arby (the version that I’m most familiar with). To coin my friend Randy Jackson, Michael really made it his own, dawg.

Not my favorite track on the album. I don’t know if it’s the recent public embarrassment by Ms. Witherspoon or the fact that I never cared for this song when Nicole Kidman sang it with Robbie Williams. I’d say this version sounds awfully similar but if you like the song, then you’ll like this version.

It’s another Sinatra tune but I love this version of it. It makes me actually want to get up and salsa to this. Or eat some chips and salsa.

It’s a love song co-written by Michael. It’s not necessarily an amazing song but he wrote this song for his wife. And listening to it through that filter makes me totally swoon.

8. “After All” (featuring Bryan Adams)

This is a new track. Is it weird when two guys duet on a song? I suppose not. And I’ve always liked Bryan Adams voice and they actually complement each other well.

I have to admit that I love the Rod Stewart version of this song. This one, not so much for me. It’s very old school and loses the emotion of the lyrics for me.

This is a cover of a Jackie Robinson song. Although, in my head, I’m hearing Elvis Presley singing it. Am I wrong? Again, very old school style singing.

I just adore this song by Randy Newman (from the movie Toy Story). Michael turns it into more of a swing version. I prefer the original but this song is suited for Michael’s voice and he put a new twist on it. I can see him singing it to the Rat Pack.

12. “Nevertheless (I’m in Love with You)” (featuring The Puppini Sisters)

Straight from 1931 comes this super smooth song that is clearly made to make women weep. Complete with the singing sisters singing back up. Dreamy.

It’s another original co-written by Michael. I love the range in his voice and I know he’s singing these lyrics from the heart. He’s full of gratitude for where he is today. This one gives me chills.

You know this one. It’s a classic. A great song to finish off the album.

I loved this album. Clearly, some songs more than others. I’m not sure how I feel about the mix of song styles. I would imagine he’s trying to gain some new fans while still hanging on to the style of music he’s loved for.

Even if you’re not a fan, you might at least appreciate the effort he’s put into the album.

“Do not think I take my success these last ten years for granted. I was anything but an overnight sensation, which inspires me to deliver big time for my fans—maybe even make some new ones this time out.” says Bublé. “I labored over every song, every note and every arrangement because I can’t resist trying to make each record better than my last one.”

And finally, I couldn’t end without adding a video. There are so awesome ones out on his YouTube channel but here’s the one that shows me the kind of guy he is:

Now, excuse me, while I return to reality. And go empty the dishwasher.

The Push and Pull of Motherhood

LOVE, LOVE, LOVE Michael’s reaction to this kid’s voice! Yes, his mom was kind of pushy and obnoxious, but after Michael’s reaction, I’d be really surprised if he didn’t hook the kid up in some way. I’ve never been a HUGE fan of Michael Buble, but just the way he handled the whole situation with the mom and the kid made me respect him more than most people.

That’s what I’m saying, right? Here’s comes this semi-dorky kid in a dragon t-shirt and he just embraces him and gives him a shot. I loved it!

Ooooh I love his musics, I love his voice…I just love him period 😀 Can’t wait to get his album.And Jason Mraz? I’ve been listening to all his music for two days straight and fell in love with him.

Sounds like you’ve got great taste in music then 🙂

How did I miss this email when it came by because I would have totally pressed the link. I am not remotely embarassed to like him, I didn’t know I was supposed to be. Now I’m embarassed for not knowing I should be embarassed!

I think there is a cheesiness factor that makes some people not like him. Or the inevitable comparison to Harry Connick Jr. (TEAM MICHAEL!!!) but I say rock on. Or swoon on, as it were.

I love Michael Buble as well! I like everything from Usher to Def Leppard to Pink to Little River Band, so I’m pretty diverse. When Michael sings “Save the Last Dance for Me” I really do get up and dance.

I am super diverse as well. In fact, when I put my iPod on shuffle, I’m embarrassed by the mix that comes out because it literally has EVERYTHING, which is not always suited for everyone 😉