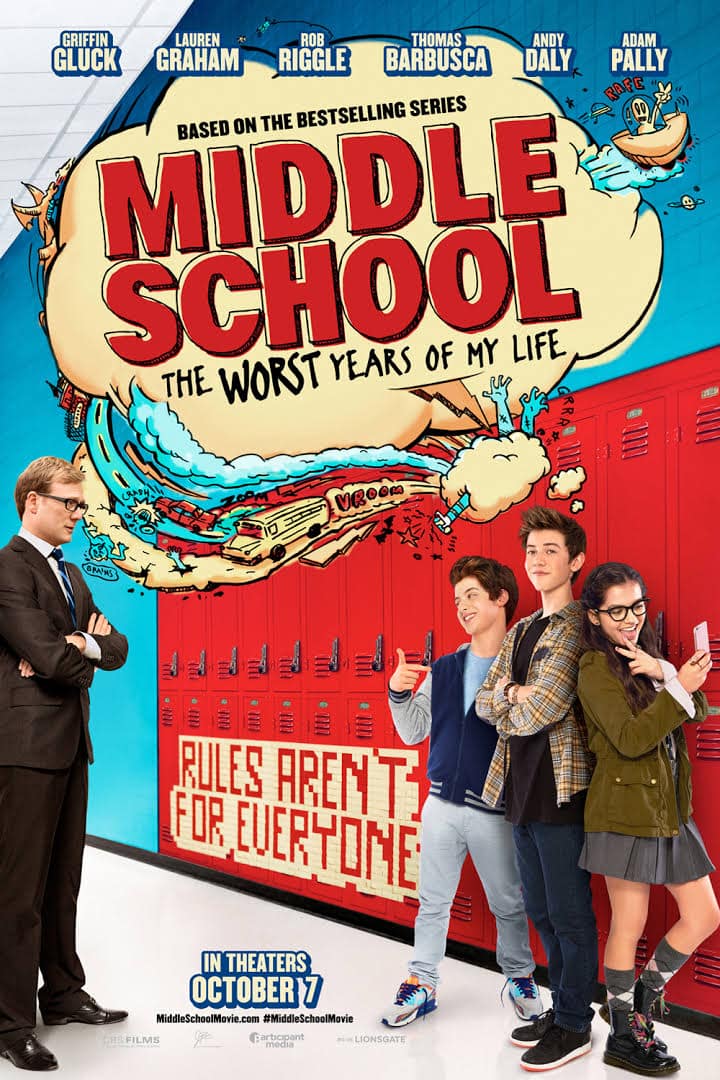 Are your middle school years really the worst of your life? Possibly. But I can tell you something worse. Teaching middle school is way worse and I only did it for a year and a half.

But if I had clever, smart, funny, and creative kids like those in the latest tween flick, Middle School: The Worst Years of My Life, I might have survived longer as a teacher. I might have come to appreciate being on “the other side,” a place where I never really felt like I fit in.

Based on the book by James Patterson and Chris Tebbetts (yes, that James Patterson), the movie represents the first in the popular Middle School series. In fact it’s so popular that I had never even heard of it until one of those ads at the beginning of a YouTube video caught my eye and I ended up watching the entire trailer for the new Middle School movie.

Oh my gosh, Evan. Have you seen this? I asked of my 9 1/2 year old son. Of course, he had heard of the book but despite the hours he spends on YouTube, he had yet to see the trailer. When I showed it to him, he immediately said, I WANNA GO SEE THAT.

Even though I had never heard of the book, I recognized that being introduced to it on YouTube probably meant they were after my son and not necessarily me as the target demographic. I can have a pretty juvenile sense of humor though so we were both excited to go see the preview.

Here’s what I went in expecting…

We’d find a total kids-rule, anti-establishment, parents-are-stupid kind of movie, leaving Evan entertained and me, well, not so entertained.

Here’s what I got…

An incredibly clever and entertaining movie full of creativity and heart. Warning: That’s my opinion as a grown-up so if you’re a kid reading this, there’s more to come.

It’s a modern story of Rafe, a generic middle schooler (I don’t think we find out what grade he’s in) who is going through a rough transitional period (for reasons you find out in the movie). He uses drawing as a release and an escape from the world he lives in. His creativity and sense of humor are exactly what put him at odds with Principal Dwight, the antagonist. Funny but despicable, Dwight is the perfect villain. We don’t hate him but we still want him to lose the major battle in the film (if you’re up on your tween shows, think of Principal Perry from LabRats).

At school, Rafe is placed in Mr. Teller’s class who appears to be a teacher in touch with his kids and wanting the best for them. The antithesis of Principal Dwight and his sidekick, Vice Principal Stricker.

On the homefront, Rafe’s mom has his (and his sister’s) best interest at heart but is so busy being a single mom that she farms out some of her parenting responsibilities to her boyfriend, Carl, who is just simply a jerk.

In the kid corner, you’ll find all sorts of good and bad moments for Rafe (like most middle schoolers) with his mom, his sister, the class bully, a best friend, and even a love interest.

Since this movie is based on the first book in a series, I would imagine that if it does well, we’ll see more films. They left plenty of room for the characters to develop and I’d be happy to see this cast reunited (if the kids don’t age too quickly!).

Now, if you’re not a grown-up and you still want to read about how good this movie is, I asked my son Evan to weigh in.

A Kid’s Take on the Middle School movie

It was a great kids movie. I loved it. It was so funny. It was a really good movie because it had a very good theme and the things were so funny because they’re true.

And that’s about as much as you can expect from a 9 year old but trust me, that’s a pretty good review in his eyes.

How to Teach Your Kid to Become a Millionaire

Thanks for the review now I am intrigued!

It was such a good movie. We both loved it!

Middle school is my worst fear!!!! (but i’ll be there with my biggest in a few short years, ah!)

Noah’s begging to see it so thanks for the review. I had the same worries as you so glad it was good! Going to see it today.

Perfect rainy day for it! Let me know what you think. I think you’ll be pleasantly surprised 🙂