What’s new with Chevy? A lot more than I thought.

I can’t tell you how many opportunities I miss because I’m an email scanner. I look briefly, usually on my phone, and either respond immediately, delete immediately, or plan to come back and look at it a little closer. It’s that last category that falls through the cracks. That’s why I love it when an email comes in with a subject line that grabs me, like this one:

YOU’RE INVITED: Test Out the Latest from Chevrolet at New Jersey Motorsports Park Driving new cars on a track? YES PLEASE! And so I put it on my calendar and didn’t even give it much thought until I set my alarm for 4:30am so that I could drive to New Jersey in time for the 7:30am start time. (Bonus: I got to see the sun rise!) I knew the Chevy Bolt EV was on the list and that’s what I focused on. The rest I’d simply figure out when I got there. I looked at the agenda for the day and realized there’s a lot going on at Chevy that’s new, innovative, and totally hot. Chevy Silverado Could Eat Your Car (or at least tow it)

We started off with a Silverado Towing Demo. That meant that we actually got behind the wheel and towed a 6000 pound vehicle around the track.

Specifically, we drove the 2017 Silverado 2500HD Crew Cab. What we were really checking was the power, the handling, and the towing capacity. With the new Duramax 6.6L turbo-diesel V-8 engine, Chevy boasts a 19% increase in torque over the previous model. As a torque kind of girl, this made me happy. Couple it with the 445 hp and this truck can move. More importantly, it can move while hauling 6000 pounds behind. Chevy Colorado Made Me A Truck Lover

Next up was the ZR2 Hill and Off Road Demo. I didn’t even know what that was until I happened upon this midsize Chevy truck, the Colorado. 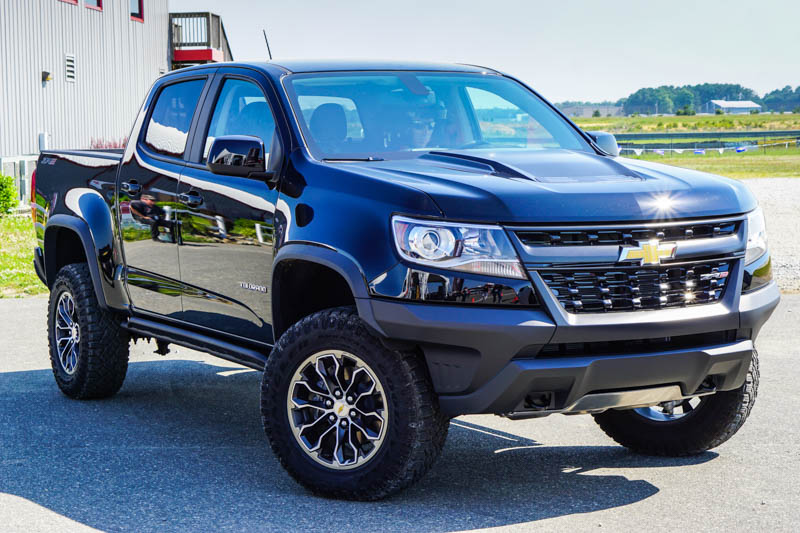 We drove the 2017 Colorado ZR2 Crew Cab. First of all,  you’ll notice the front looks a little weird. That’s because the ZR2 is made for serious off-roaders and Chevy wanted to make sure we knew it. The front bumper is actually tapers to increase tire clearance when approaching things in the wild. And you’ll also find a thick, aluminum skid plate protecting the radiator and engine oil pan.

If you’ve ever off-roaded, you know that another important feature is the shocks. The ZR2 borrows from racing by using independent coil-over-shock Multimatic Dynamic Suspensions Spool Valve (DSSVTM) damper technology. That translates into capable and elegant movements. Here’s how I know.

We got behind the wheel and headed over a course of alternating bumps. While the wheels move independently, the cabin remained relatively stable while the truck did a “dance” across the obstacles. And then we hit some ramps. Not at high speeds but the Colorado handled them like a champ. I was hoping to hit them Dukes of Hazzard style but never quite made it off the ground. Our Colorado ZR2 demo wasn’t over yet. We suited up and jumped in with a professional driver behind the wheel to take us on a more treacherous demo. With a few more obstacles, include a hill climb, we were able to see the value of both front and rear locking differentials (essential when you’re stuck).

First up was a ride across this terrain where we had one wheel completely off the ground. Not only can you see the shocks at work but the Colorado recovered like a pro. Next up was the hill climb. They wouldn’t let us drive because making a wrong turn off that ramp wouldn’t have been bad… for Chevy AND us. So we ascended and the hill is much steeper than it looks. Add in some rollers to simulate losing traction on 3 out of 4 wheels, and it was pretty amazing that locking differentials handled it like a boss and we were soon on the descent. What goes up must come down and the descent was just as steep as the ascent. With power-assisted four-wheel disc brakes with Duralife long-life rotors and hill descent control, we came down gracefully. And I fell in love with a truck. Electrification Never Felt As Good As The Chevy Bolt The Bolt EV Closed Course was the only thing on the agenda that had been seared into my brain, Maybe it’s because my husband, a former Volt owner, keeps telling me the Bolt is my next car (why doesn’t he buy it then?).

It’s fun. It’s zippy. It looks cool inside and out. But you won’t be sold on it until you get behind the wheel. On our closed course, we had just enough room to test out the Electronic Precision Shift System (which I love). It’s something you’ll start to see in other GM products as well. And get blown away by the torque – that’s what gives it the zippy feel. (Surprisingly, the Bolt EV can go from 0-60 mph in less than 7 seconds!)

But my favorite feature is the regenerative braking which, in low gear, allows for one pedal driving. Seriously. Put your foot on the gas to go. Remove it to stop. A total lifesaver in stop and go traffic.

And just in case you want to see what’s under the hood, you’re look at a permanent magnetic drive motor which helps the Bolt EV achieve up to 255 miles on a single charge. Remember the Equinox? Neither Did I. Right next door to the Bolt EV was the Chevy Equinox. I found myself scratching my head saying, what’s the Equinox again?

It’s not a Traverse, although with the redesign for 2018, you’ll see a lot of similarities. It feels more modern, elegant, and just has more all-around style. The 2018 Equinox is a classified as a small SUV but it felt more like a large SUV without a third row.

What impressed me the most, though, is the handling of this vehicle. We took hairpin turns on our close course and the Equinox handled them like a boss. Not only that, but with a redesign that shed 400 lbs, the Equinox gets impression gas mileage ranging from 24 to 32 mpg, depending on your trim and configuration. And if that isn’t good enough, you might be impressed that the Equinox now offers a segment-exclusive turbo-diesel.

So THIS Is Why People Love Camaros I’ll admit it. When it comes to Camaros, I’ve always felt very meh about them. Well, all that changed on the track in the 2017 Camaro ZL1.

We rode shotgun this time while professional drivers showed us the hard acceleration and hard braking that the ZL1 could pull off. As well it should. This year’s ZL1 weighs 200 lbs less and 70 more hp. FAST!

It’s clear that Chevy understands its enthusiasts by focusing on even the smallest details. Just take a look at the grill details of the Chevy Camaro 2SS vs the Chevy Camaro ZL1. Both are fast, capable cars but to provide the extra air intake needed for the ZL1, they’ve created a hollowed out Chevy badge – the only one in the fleet. How The Corvette Showed Me My Limitations If you saw a lineup like this of the 2017 Corvette Grand Sport, what would you do? Would you get behind the wheel and take it for 3 laps on a racetrack?

Look
If you had
One shot
Or one opportunity
To seize everything you ever wanted
In one moment
Would you capture
Or just let it slip?

I hate to disappoint you but I didn’t drive it. Yes, I could have driven in. But my palms would have been sweaty and I would have hit the brakes too much and I really wouldn’t have seen what this car can do. It was made for the track. And I wanted to take the one opportunity to see it pushed to the limits.

Instead, I opted to ride with professional drive, JR, from Texas (I’m not even kidding about that name). It was clear that he was the fastest driver out there (probably because we were first on the track). He scared me but it’s better than me scaring myself because I knew JR could handle it. And he did it all one handed while coaching the other drivers over the radio. I’m not sure how fast we went. I stopped watching when I saw the speedometer exceed 110 mph but JR showed me the best features of this car built for speed.

Going 0-60 mph in 3.6 seconds with quarter-mile capability of 11.8 seconds at 118 mph, there’s something just as important as the 460 hp. That’s the Brembo braking system that offers estimated 60-0 mph performance of less than 100 feet..

At the end of the day, it was all about education, fun, and safety, of course. I walked away with a renewed love of Chevy ready to send all of you off to the dealers to check them out. There’s clearly a Chevy for everyone! Will Your Tweens Enjoy the Nostalgia of Cars 3?

I TRIED IT! Putting the American Wave in my Hair

2017 WAPA Road Rally: These Cars Are My Winners!

Great read Fadra! That’s so cool you got invited to test out all different types of Chevy vehicles. With that said I’ve owned 3 GM vehicles and they had left a bad taste in my mouth. I’ve owned a ’88 grand am that had many many issues but the final straw was the tranny going. A sleek ’88 monte Carlo that threw a rod at 70k. And a ’92 Astro conversion Van that the tranny also went. Granted they were 80’s era vehicles but they definitely left a bad impression on me UNTIL I rented a new impala LT when visiting Disney World last April ( there was four adults and we needed the luggage space! ) It was smooth riding and very nice and roomy and definitely the best impala to date. Too bad you didn’t get to test that car out but it seems Chevrolet isn’t marketing it very much which is a shame. I own a 2016 CX-5 grand touring but I might beat your husband and get my wife the Bolt!

I totally get your impression with GM cars. I’ve never really been a fan UNTIL… it was about 3 years ago when I drove the new Impala and was thoroughly impressed. I’ve since checked out the Malibu, Cruze, Volt, and I think they’re headed in the right direction. But you hang on to the CX-5. I still love mine. I’m not trading it in for the Bolt yet!